X-Men #6 by Jonathan Hickman, Matteo Buffagni, Sunny Gho, and Clayton Cowles is a much-needed flashback to Mystique’s role in the House of X event, offering present day insights into the apparent strong return of Orchis, those sentinel obsessed humans the X-Men gave their lives to stop. The issue’s effective at connecting back to the celebrated event that birthed the Krakoa era, while also suggesting the victory was not nearly as certain as mutantkind previously thought.

For the full Dawn of X reading order:

History of Mystique and Destiny

+ The history between Mystique and Destiny

+ What the return of Orchis in this issue means for Krakoa and the House of X!

Notably, X-Men #6 features no data pages, maximizing a full issue’s worth of story for Mystique’s emotional power struggle with Professor Xavier and Magneto, as well as the development of the Orchis threat thought crippled. Like X-Men #4, issue #6 is a deliberate follow-up to the event that started it all, and feels tremendously essential.

Looking back to House of X and Powers of X, when we first see Mystique, she’s in the process of stealing a data file from Damage Control with Sabretooth and Toad. When she returns to Krakoa – narrowly escaping the arrival of the Fantastic Four, who arrest Sabretooth – she delivers the data to Magneto.

There’s really nothing suspicious about this interaction in these early stages, as Mystique and Magneto have long fought on the same side, and certainly from the early 2000’s movie franchise alone, now have a cultural perception of closeness and allyship.

First, though, Mystique uses the acquisition of data as leverage against Magneto and Professor X. Mystique makes “demands” of Magneto and the Prof, before Xavier sarcastically condescends to her with the line “Is helping your fellow mutant not reward enough for Raven Darkholme,” a line Raven will wryly use back against the Professor in mere moments.

House and Powers were really about Charles and Erik’s plans to use Mystique’s stolen data, and less about what she really wants. Following the House of X #4 mission gone terribly wrong – remember, Mystique gets “lost” and the entire X-crew is killed in the process of preventing Orchis’ Mother Mold from becoming operational – Mystique is resurrected and made one of the 12 members of the Council. This appears to be Professor and Magneto’s efforts of placating Mystique, although it’s clear from her abject boredom during Council meetings, that Raven has something else in mind.

In X-Men #6 this scene is replayed but this time with an extended cut that reveals Professor X and Magneto also asked Mystique to plant a seed on the Orchis station during the X-Men’s mission to sabotage the Mother Mold. This is why Mystique mysteriously takes a wrong turn during that issue, and becomes crucial as the planted Krakoan gate allows Mystique to travel to the Orchis station under the guise of one of their soldiers to monitor their progress.

This is one of those story beats that Jonathan Hickman is great at, fitting wrinkles into pauses and breath left behind in previous issues. There’s a sense to how the puzzle fits together, and also a clear-eyed vision that shows this was the plan all along.

During the process of reconnaissance, Mystique learns that Dr. Alia Gregor is making progress on the development of Nimrod, and that the X-Men’s destruction of the Mother Mold was not the apparent end of the Nimrod threat that mutantkind had hoped.

This is catastrophic news for Magneto and Professor X’s plans. Not only is Orchis restoring what they’re calling a “Sentinel City” on Mars – have to think that’s not the last time we’ll be hearing of Sentinel City! – but the dramatic House of X #4 infiltration didn’t even stop the rise of Nimrod.

Personally, I think this is a brilliant reveal. Nimrod was so effectively built up as the ultimate threat to mutantkind in the pages of Powers of X, so the adaptive mutant hunter is a borderline requirement to retain tension towards the mutants attempts to assure a future that doesn’t result in their own extermination. Plus, it highlights that even with Moira’s lifeline insights, the Krakoa era of X-Men is far from a guaranteed success. In fact, so far based on Moira’s lives, everything she tries leads to failure; this is a hint that the same inevitability may be at play. 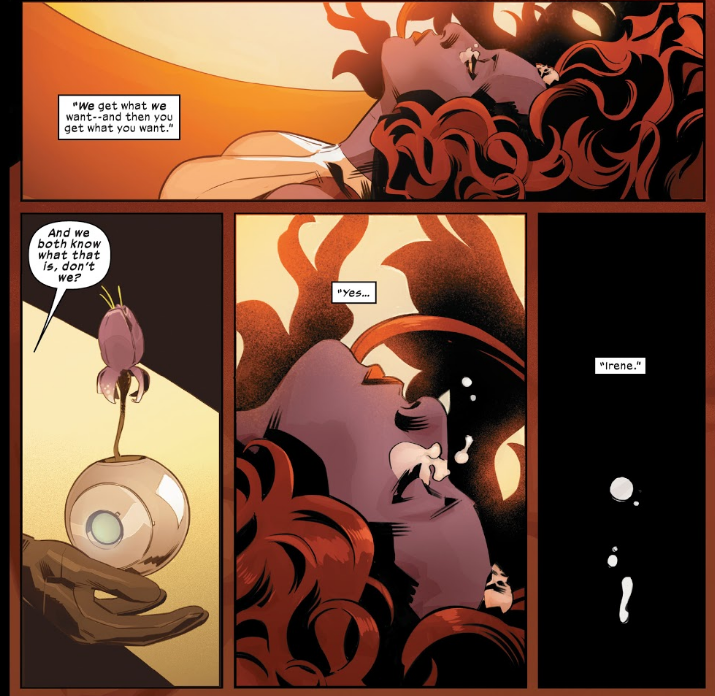 So why is Mystique running all these errands for the Prof and Magneto?

Given the closeness of their relationship historically, many have postulated that Mystique is most dedicated to the resurrection of Destiny, and that’s quite clearly made explicit here. Mystique teases that she doesn’t kill Dr. Gregor because of Krakoa’s laws about killing humans – which Magneto characteristically throws out the window in a millisecond – but the reality is she’s holding out in an effort to get the resurrection committee to make good on their promise of bringing back Destiny.

For the less familiar, Mystique and Destiny (aka Irene Adler) debut in the pages of Uncanny X-Men #141 to #142 during the incredible “Days of Future Past” storyline by Chris Claremont and John Byrne. They found a new Brotherhood of Evil Mutants with Avalanche, Pyro, and the Blob and make their presence felt with assassination plot against one of the most public anti-mutant politicians on the scene, Robert Kelly.

There are actually a ton of fascinating moments from “Days of Future Past” that read differently in the wake of the House of X event. I don’t want to get too sidetracked but we just re-read the issues in the My Marvelous Year reading club and podcast, and I had completely forgotten that Mystique and Destiny’s Brotherhood of Evil Mutants set out to not only assassinate Senator Robert Kelly, but also Professor X and Moira MacTaggert! This feels especially pointed given what we now know about Charles and Moira’s founding of Krakoa.

While never explicitly stated due to Marvel’s frankly homophobic & fearful 1980s editorial policies, hints of Raven and Irene’s love are frequent throughout their history together as atypically close friends and allies.

Their relationship and romance has only recently been made clear in the pages of History of the Marvel Universe #2 by Mark Waid and Javier Rodriguez.

There’s a really great article by The Beat describing the character’s full history, and I’ll share that in the show notes! https://www.comicsbeat.com/history-x-mens-destiny-mystique/ 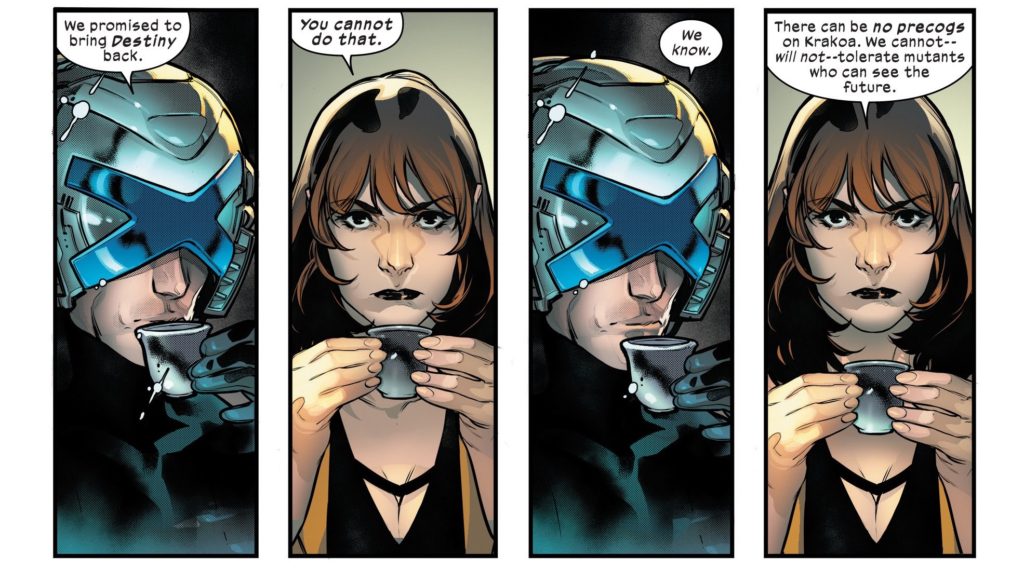 Mystique and Destiny’s relationship raises problems for the shadow triumvirate of Magneto, Charles, and Moira because in Moira’s third timeline, it was Destiny who proved capable of seeing Moira’s lives, and effectively putting an endcap on her ability to experiment with the future of mutantkind. You know, before Mystique, Destiny and Pyro brutally burned her alive.

House of X event even ends with Moira very directly telling Charles and Erik that they cannot resurrect Destiny under any circumstances. The fear is apparently not specific to Destiny – Moira states “there can be no precogs on Krakoa,” which now that I think about it raises some major questions about the status of Blindfold in the Krakoa era – but nonetheless it’s clear the mutant trio have no intention of actually delivering on their promise to Mystique out of their own still mysterious self-interest.

We haven’t seen hide nor hair of Moira since the Dawn of X began, but I’m extremely curious about this mandate. It’s both sinister – what is she so worried about hiding from precognitive mutants? – and feels like self-sabotage. Couldn’t working in tandem with mutants who can see the future help mutantkind’s efforts to craft a better future? I have to believe that there’s something quite devastating in Moira’s plans, like Ozymandias willing to sacrifice millions in Watchmen in order to obtain world peace.

As you’d expect, this is tremendously frustrating for Raven Darkholme. Charles and Mags are constantly moving the goalposts, and quite clearly have no intention of actually restoring Destiny to life for Mystique’s benefit, or simply because she’s a mutant and that’s what Krakoa does now. If you’re Mystique looking around at all the previous threats Professor X and company are welcoming onto the island, or the absolute wild card resurrections like Jamie Braddock in the pages of Excalibur, there’s no sensible reason to withhold Destiny beyond keeping Mystique on a string.

Professor X and Magneto have their Moira-based reasons, but this constant refusal in the face of a woman screaming that she wants her wife back – and knowing it’s within their power – is one of the cruelest measures we’ve seen them take.

We’re a long way from Mystique getting under Professor X’s skin in the pages of the early 2000’s Brian K Vaughan written Mystique solo series. When Professor X talks down to a deliberately teasing Mystique in these comics, it’s with a presence of stodgy leadership and respect.

Now when Mystique shares her hatred for Charles Xavier, it’s deeply felt, and feels like the sort of animosity that there’s no walking back from. Stranger too, as a reader, I’m on her side!

The issue ends with Mystique revisiting a conversation she had with Destiny, prophesizing the emergence of Krakoa and the refusal to resurrect her person.

I have to think that Professor X and Magneto have pushed Mystique beyond her breaking point, and that’s planning to make a move without their permission. I’d keep in mind too, that Mystique is a member of Krakoa’s council, and we’ve already seen Sebastian Shaw leverage that position for his own personal gain in the pages of Marauders. I fully expect Mystique to make similar moves, perhaps with the likes of Shaw, Sinister, or even Apocalypse at her side.