When one thinks back on early aughts comic book curiosities, one prominent entry on the list might be Stan Lee’s Just Imagine…

universe, in which he (and many, many artists) created a reimagining of the DC Universe by feeding Lee a basic premise and letting him go his own weird direction with the idea.

This shaky groundwork did not make for an especially groundbreaking series, and the issues have seldom been referenced since, with a few exceptions (every wild idea at DC comes back in a Grant Morrison comic

at some point). Still, most things Lee was ever even remotely involved in are being recollected today, and so we’ve got a two-part trade that collects these wacky, wacky stories. We’re talking about the second volume of Just Imagine Stan Lee Creating the DC Universe

Each of these books opens with a disclaimer from Lee: “Hi, true believers! I just wanted to emphasize that this project is intended as a heartfelt tribute to the talented artists and writers who have created DC’s greatest heroes. Anybody can come along after the hard work has been done and write a different version of some famous feature. Please don’t think for one minute that this is an attempt to improve on any of the truly great characters that have become legendary throughout the world. The new versions in this series are merely a fun exercise, a chance to work with some of the best artists in comicdom – a chance that no writer could refuse. So I hope you enjoy this somewhat different look at a few of your favorite heroes, and remember – the version you’re about to read owes its very existence to the true masterworks that came before it. Excelsior!”

This paragraph was probably necessary to add when reimagining an entire creative universe that one spent years referring to as the Distinguished Competition, but it also promises the reader that these stories are pretty incidental and nothing to get too excited about. 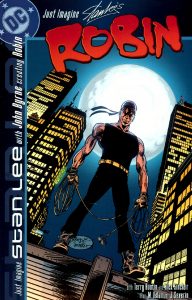 Lee’s Batman was introduced in the first trade of Just Imagine, and this is his Robin, who is named after a literal robin. No one knows his origins, and he spends much of the story running errands for Reverend Darrk, who has promised to give him news about his parents. He encounters Wayne Williams, Lee’s take on Batman. They start the issue brawling, before, of course, coming to respect one another and learning to work together.

Taking a famously charismatic character like Robin and turning him into a moody, violent guy is an interesting choice, but his dialogue makes him read like a second-rate Wolverine. He has a fixation on a social worker named Beth who he refuses to speak to, but for some reason seems to be interested in him. She’s the star of the backup feature and it’s the best part of the book, which follows her as she tries against all odds to hold a corrupt system accountable.

This is not Byrne’s finest moment as an artist and there’s a lot of panels in which his backgrounds are so sparse as to be non-existent. His martial arts sequences are highlights, but we miss out on Byrne’s usual flair for character design when he reimagines Robin’s brightly colored costume as a black leotard and red bandana. All of the characters are visually generic, which takes a lot of the fun out of Byrne’s art. 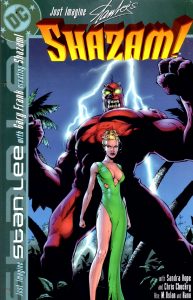 This story just goes ahead and opens up on an almost totally naked Morgan La Fey fighting a very clothed Merlin, some time in the past. He traps her in a tree (as you do) and creates a big old monster to go up against her in battle should she ever escape. Fast forward to Stan Lee’s version of modern-day India, where we meet the secret agents Robert Rogers and Carla Noral on the trail of Gunga Khan. The agents find a group of highly stereotypical men beating a street performer to death. This scene is surprisingly extreme when compared to the cartoony nature of the rest of the book and creates a bit of tonal whiplash. As death takes him, the man passes on the power of Shazam to Robert. Robert struggles with this power, as well as his feelings for Carla, as they take the fight to Gunga Khan.

Gary Frank was a good choice for an artist and he helps make the book look fun and dynamic. This odd, demonic version of Shazam lacks the iconic look of Captain Marvel, but his Doomsday-esque appearance lets Frank do what he does best by giving us compelling action sequences. The Gary Frank art of the main narrative and Darwyn Cooke’s work on the “On The Street” backup story are visual highlights of the series, but it can’t rescue a comic that is made up almost entirely of harmful stereotypes. 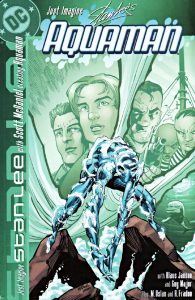 If you bought this collection out of nostalgia for Lee’s Tales To Astonish-era Hank Pym stories, this is going to be your exact jam. The story follows scientist Ramon Raymond and his girlfriend, Amelia. Ramon casually injects himself with dolphin DNA while hanging out on his houseboat, which helps him become a… being made entirely… out of water… okay, listen. Stan Lee science is different from regular science.

This plot is fairly loose, and mostly involves Raymond mumbling to himself about science, avoiding spending time with Amelia, and fighting gangs of Darrk’s men with his brother. Again, the gender dynamics are pretty questionable, with Amelia filling the essential role of a pre-Avengers-leadership Janet Van Dyne and Ramon taking on Silver Age Hank Pym. While Ramon prattles on about Stan Lee’s version of science, Amelia bemoans that they aren’t “shopping and partying,” leaving one to wonder what these two even see in each other. There is a scene in which Amelia is cornered by several men threatening to rape her, which marks yet another moment in this trade where the violence of the story doesn’t fit the lighthearted theme and creates a jarring dissonance.

Scott McDaniel is a good artist whose work is often a delight, but he seems mismatched with this story as the sci-fi elements are pushed to the side to favor his trademark hyper-agile fight scenes. The story takes place mainly in or around the water, but the coloring and art aren’t especially adept at pulling off water scenes. Aquaman looks like he’s made more from snow than water, and it doesn’t click visually. 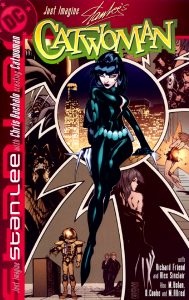 Joanie Jordan is a supermodel who feels alienated by the glamor of her existence and yearns for a greater purpose in life. Her only companion is her cat Ebony. One night, gunmen break into her apartment and Joanie and Ebony are hit by a bolt of green lightning, which fuses them together, granting Joanie the proportionate strength of an adorable house cat.

This story is pretty fun, and it works because Chris Bachalo’s art is so skillful at filling in blanks and adding dynamic humor to a story. The costume designs are simple yet classic, and the action is enough to keep from putting too much weight on the plot. Joanie’s relationship with her father and her wholesome desire to do the right thing is endearing. All in all, this is a fairly tight issue, and one of the better entries of the series. 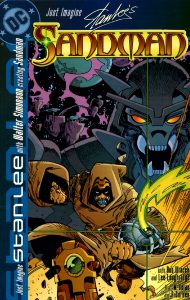 Larry Wilton is an astronaut who goes on a mission into space to investigate a strange cloud that scientists have linked to an affliction known as the “sleeping death” which has affected an alarming number of people on earth. Wilton nearly dies at the hands of a crewmate that works for, you guessed it, Reverend Darrk. Yet while drifting to his doom, Larry disappears into the mysterious cloud, which transports him to Dreamworld, a place he imagined as a kid. Newly superpowered, he goes up against The Thief of Souls, who turns out to be none other than, you guessed it, Darrk.

This entry is my personal favorite of this book, and it highlights all of Lee’s talents as a writer. He gives us an everyman, Larry, whose struggles with chronic illness in childhood granted him lifelong pathos. Simonson’s art is fantastic, and he’s truly at the top of his game here. The Dreamworld demons call back to the days of Simonson’s “Inferno”-era X-Factor, and it adds a lot to the visual flow. Darrk is finally interesting as the Thief. Of all these stories, this is the one that could have most easily sustained a longer arc. 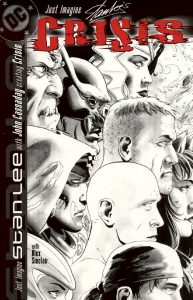 This is a full-on team-up book that pulls the heroes in, centering around an omnipotent cosmic force known as Crisis, the Dream Lord. Crisis seeks to merge the waking world with Dreamworld, and the heroes struggle to stop him while trying to uncover the mystery of a traitor in their midst.

On the surface, this is all pretty standard superhero team-up stuff, but there are some very fun moments in this story. The comparatively low-powered Catwoman makes up for it in chutzpah, and she supplies a lot of the comedic highlights of the story. The classic round of in-fighting among the heroes is fast-paced enough that it doesn’t start to grate, and the scenes where the heroes learn to work together are entertaining. Robin comes full circle in some surprising ways, and it leaves this whole run on a fairly positive note.

In the end, this series is a fun thought exercise, and it’s a nice showcase of some great artists, but it’s also where we see how little Lee’s politics and his views around gender and race evolved since the ‘60s. The characterization seldom extends beyond staples from Lee’s Silver Age era, and attempts to modernize the stories are mostly regulated to bizarre spikes of violence in otherwise breezy plots. Reverend Darrk is an uninspired villain, and his role is never as captivating as it would need to be to justify his constant appearance throughout these stories.

Still, most people looking to pick up this trade are likely compelled by its strange premise and the chance to see some of comics’ greatest talents team up with one of the men who redefined superheroes. The Catwoman and Sandman comics are genuinely good, and most of the rest of the stories at least have their moments. Not every comic has to be a masterpiece, so if you’re in the mood for some fairly light reading that calls back to Lee’s Greatest Hits, this book could be for you.