I wish Iceman was better.

I’ve been thinking a lot lately about the prevalence of hate and destruction in comic book “fan” culture. It’s a disturbing and depressing reality of fandom, and although I see very little of cultural toxicity on Comic Book Herald, when I branch outside to my writing on places like CBR, it’s a world immersed in anger. It’s like one of Jack Kirby’s “mad-bombs” went off inside the commenting sections of every comic book discussion on the web. When I think about new comic book readers, or even longtime readers on the fence about getting engaged, I see this and think, why would you want to be a part of that?

There’s no way around it, Iceman is a book that divides. This is in no part the fault of the creators, Sina Grace and Robert Gill, so much as the unfortunate reality of homosexuality eliciting such virulent emotions in the populace at large. For the many, many comic book destroyers who see Marvel’s leftist policies in all things, a gay Iceman is begging for seething cries of “SJW” at the absolute most polite. For many others, though, Iceman becomes the only Marvel Comic with a lead gay man, and the only book that delivers a hero like them. Even though he’s long been a role player in the X-Men universe, Bobby Drake is suddenly right in the middle of a massive debate that extends well beyond the pages of fantasy fisticuffs.

I certainly don’t have all the answers when it comes to social politics, but right off the bat it’s an undue amount of pressure on Iceman to be such a good comic that it alters the world’s perception of gay men. That’s just not a fair expectation for any media, but it is the environment Iceman enters. 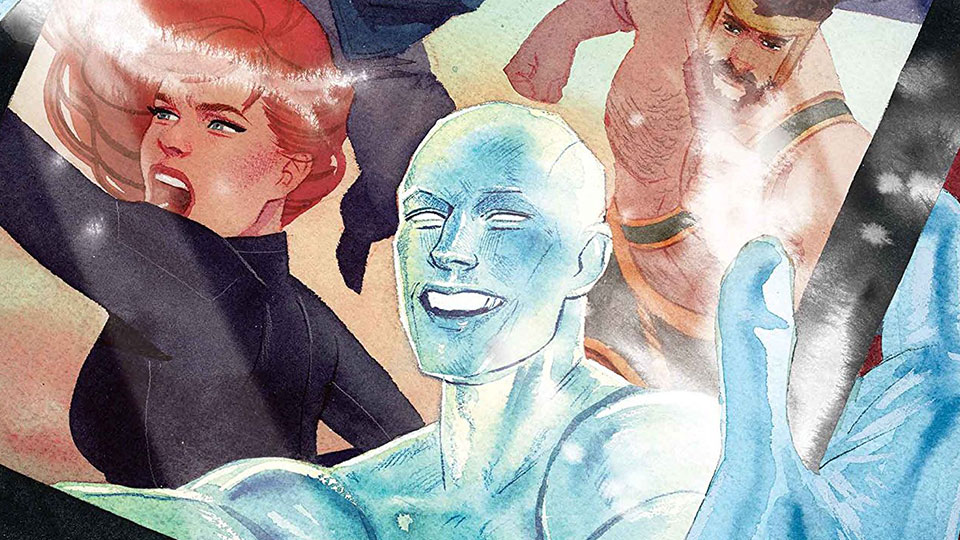 And that’s why I wish Iceman was a better comic. I wish that much like DC’s Midnighter

, I could stand on the rafters and shout “Get over your petty grievances and just read the book – it’s great! If you don’t agree, cool; read something else!”

There’s no social agenda necessary to understand that Marvel Comics are better when they capture a variety of perspectives. This allows for more unique storytelling, and most importantly to readers like myself who have read so darn many Marvel Comics, it allows for new stories. Telling the same stories in the same situations repeatedly is boring. Comics shouldn’t be boring.

Exploring a cast of Uncanny X-Men from all over the globe created one of the most exciting team dynamics in comic book history, and a legacy that thrived from the mid-70’s through the 90’s. The stagnating and forgotten X-Men didn’t need to recast the American teenagers Jack Kirby and Stan Lee had introduced to readers in the early 60’s – we had heard that song before!

Apart from representation, though, Iceman is not a comic – to this point – that engenders such excitement.

Reconnecting Iceman to the Champions

– that oddball, short-lived Marvel Team-Up from the Bronze Age – is a strange gate to his “Legacy.” Much like connecting Iron Fist to his 70’s battle with Sabretooth, though, Bobby and the Champions highlights just what a long strange trip it’s been for the character.

Aside from adding a non-X-Men cast of superheroes to the comic, the Champions reunion mostly functions as a means of acknowledging Black Widow’s death in Secret Empire. It’s a smart reason to bring the forgotten squad together in California, and one of the few instances I’ve seen so far of a Marvel Legacy title actually referencing this summer’s mega event. Although I have virtually no need to see this team reunited for the long term, Hercules, Warren Worthington, Johnny Blaze and Valkyrie make entertaining foils for Bobby as he deals with an identity crisis.

For his part, Bobby behaves brashly in Iceman #6, destroying a hardworking art sculptor’s model Sentinel – on her own property no less – for representing an “object of hate.” This is actually a fascinating ethical dilemma that I hope Grace and Gill explore further in the arc. I hadn’t connected these dots, but do the Sentinels of the Marvel Universe mirror the likes of Confederate Flags and Nazi paraphernalia in the modern U.S.A.? They certainly represent hatred and hunting of mutants, so Bobby’s emotional outlash becomes more understandable if still ethically debatable.

At the end of the day, Iceman is a book that can’t hide away from big uncomfortable (for some) questions, even if it wanted to. Ideally the series can capture its own sense of special storytelling before forever being marred with the label of “token diversity.” It’s a preposterous amount of pressure, but Iceman’s Legacy introduction plants some seeds of hope.