Darwyn Cooke (New Frontier, Parker) has famously derided both Marvel and DC for their habit of “catering to the perverted needs of forty-five year old men.” He’s not alone in that critique either. All over the comic industry, fans and creators alike have lamented the saturation of mature content and the lack of quality all-ages material. They question whether or not the “adult “comics are turning off younger readers and their parents, and if they are losing a whole generation of readers to the black abyss of “eh, I only really watch the movies.”

Well, Mr. Cooke and company, you can rest easy. You have most definitely found your salvation.

In its 5th issue, DC’s Gotham Academy has cemented itself not only as a truly great all-ages comic, but as one of the best tiles in the entire New 52 lineup. Often described as a tantalizing mixture of Harry Potter and Batman: The Animated Series, Brendan Fletcher and Becky Cloonan’s story is one that balances dark mysteries with teen drama and actual, genuine fun. Plus, they have the benefit of Karl Kerschl’s amazing manga/comic art. It’s new, fresh, and completely right for this story. 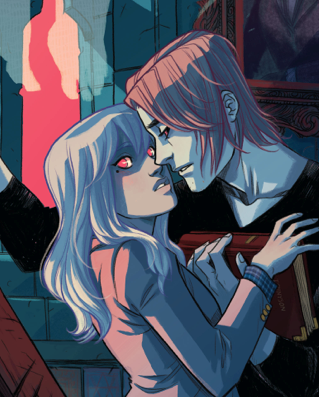 You’ll smile when reading this book. Hell, you may even laugh. And that’s all thanks to some of the most charming and likable new characters to be introduced in a long, long time. From the dynamic duo of Olive and Maps, to the wisecracking Colton, to the mysterious Trystan Grey, readers will find plenty to like in the newest addition to the Gotham mythos. A random billionaire playboy may also pop in from time to time to check on the students.

In this month’s issue, Fletcher and Cloonan continue to expertly walk that delicate line between overarching mystery and reader satisfaction. While we tread ever closer to an explanation for Olive’s mother and the enigmatic events of the summer, the creators insure that we readers are entertained. As a recent Arkham escapee by the name of Killer Croc seems to have all the answers, that’s where our heroes will take us.

As he is hidden away in Gotham Academy’s restricted North Hall, Olive and the gang must navigate quite a few obstacles in order to find the incognito Croc. These obstacles come in the form of a school dance, relationship problems, and an awesomely shocking character reveal. Watching the students formulate an elaborate break-in is also one of the most enjoyable pages you’ll see this week – it’s very Goonies-esque. Maps even makes a freaking map! There are puzzles to be solved and locks to pick, but in the end, the gang makes it to the North Hall and finds Croc.

And what a scene it is.

Instead of the usual “I’m an angry monster” incarnation of Killer Croc, Fletcher and Cloonan give us a pleasantly relatable version of the villain. As he goes to town on gifted canned food, Croc is depicted as a lonely man who is in desperate need of company. His relationship with Olive’s mother is elaborated on, and the girl almost finds the answers she is looking for.

Until a certain famous Gotham hero makes an appearance.