You are here: Home / Reviews / DC Reviews / Why I’m Done with DC’s Dial H For Hero (and why it will never be Lebron James)

We see this with athletes all the time. The player of immense talent who never cares quite enough to hone his game to a championship level. For years it was the rap on Lebron, and as a  basketball fan there was nothing more disappointing than thinking he would stagnate and deprive the world of a new level of great.

DC’s Dial H For Hero has sunk into this level of stagnation and I don’t anticipate a championship run any time soon.

Although it was substantially less hyped out of the gate, I saw a Lebron-like level of potential in Dial H For Hero.

Wait, wait, wait… you thought Dial H For Hero was gonna be the next Jordan? Errr… Batman? What was the strained metaphor again?

Honestly, though, I saw a glimmer of hope that maybe – just maybe -Dial H For Hero could be the next big thing.

I saw shades of Sandman.

I know. I hear you. Ok, seriously, that’s enough, I know! It sounds absolutely absurd now, but I really thought Dial H For Hero could be the rare no-name comic that pushed boundaries and made the complacent big two comic book publishers re-think what it means to make good art (to steal a line from Sandman’s own Neil Gaiman).

I even wrote as much during DC’s Year Zero issues, admiring writer China Mieville and artist Mateus Santolouco’s unfiltered creativity. 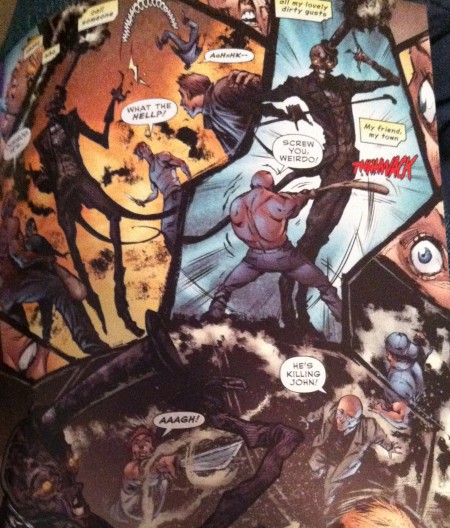 In retrospect, I was overrating the comic even then, but there was a definite sense of risk-taking about Dial H that excited me.

In a perfect world, Dial H felt like it could be that rare new 52 book that crosses into the experimental and thought-provoking realm generally reserved for Vertigo.

For a while, it seemd like this might happen. Mieville was taking chances with Joycean stream-of-consciousness, and Santolouco was blowing up standard grid panel structures to match the kinetic energy of each new hero.

And the heroes! A new hero with every dial meant boiling every few pages down the most basic and joyous form of comic book inventing: What’s your idea for a superhero?

Yet, here we are, issue #9 of Dial H For Hero, and all we really have is trite and cliched story-telling with none of DC’s star power. Stop me if you’ve heard this one before: A mysterious governmental agency (let’s call it Canadian) seeks to capture or destroy our current heroes, largely in the hopes of turning their power into a weapon.

It’s really a shame that Dial H has devolved into such a traditional book. Where I was once excited by the potential, at this point I don’t even care enough to continue through the remainder of this story arc.

Issue #9 ends with our main hero, Jent, in GRAVE PERIL!!! I’m choosing to let him remain that way.

I can’t understand the thinking behind making Dial H a painfully conventional book. Who is this comic for exactly? Presumably, some comics are kept conventional for sales purposes – because more people are going to buy a Superman comic where he fights aliens than one of him doing nothing but taking a shower and thinking.

But who is buying Dial H based on the name of the book? Who walks blind into a comic shop and instinctively seeks out this title?

The only way a book like Dial H can succeed is through elated critical acclaim and a subsequent torrent of word of mouth praise (preferably without actual torrents). Look at Saga, Hawkeye, or Mind MGMT. These books succeed on the basis of unparalleled quality, and a corresponding willingness to take chances with the comic book medium.

It was always going to be an uphill battle for a book like this, but the current strategy has damned the line. I blame the vague concept of DC editorial for this, but I’m well aware that I have no real idea why the comic has stalled the way it has.

DC’s clearly going to be reinvigorating the new 52 with new lines every quarter or so, and it’s only a matter of time before a DC exec has to make a decision between a new Plastic Man or Dial H For Hero.

In my basketball analogy, Lebron had several seasons of a career to figure out what it took to become a champion. Dial H will be afforded no such luxury.

It’s a shame, but Sandman this ain’t. Time to retire Dial H.