Doctor Strange is a character who can be difficult to use in comics with wide reaching continuity. Sorcerer Supreme? Master of the Mystic Arts? Sounds like a walking, talking Deus ex Machina, able to step in and solve any problem important enough to warrant his attention. This collection of Doctor Strange comics from the 70s deals with these problems in two ways. One way is by giving him problems so far outside the scope of human problems that they pose a challenge for even a sorcerer supreme. The physical manifestation of eternity? Go for it. Satan? Here he comes. How about a collection of beings who’ve decided they should replace the stars in the sky, by becoming stars themselves? Lay it on me. High concept and over the top, the success rate is mixed, but when the stories land, do they ever.

And dealing with all these heady ideas and beautiful nonsense, that’s where the second point stands out. Throughout these stories, Stephen Strange is plagued with doubt, and, despite his powers, fear of his all too human fallibility. It would be easy to dismiss the sort of character who battles Eternity as just another cardboard cut-out, if they couldn’t understand the doubts of our eponymous hero.

There’s a range of writers, artists, guest artists and one shots throughout Doctor Strange: Alone Against Eternity

. The Epic Collection line does an admirable job of collecting everything, rather than paring a graphic novel down to the work of one writer, or one story arc. That said, there are three parts I’ll be talking about, representative of the most notable stories found here.

The majority of this book is written by Steve Englehart, with Gene Colan on pencils. After them, we’ll move into the annual, illustrated by P. Craig Russel, with co-plotting by Marv Wolfman, and ending with an arc overseen by Jim Starlin. 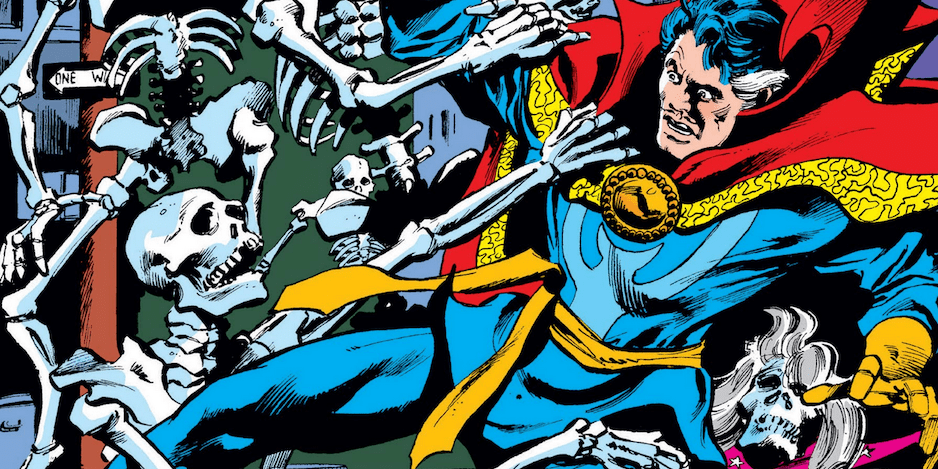 Part One: A Magic Trick with Missing Pieces

The flip-side of this cheesiness is you get absolutely delightful moments, like a demon calling Strange and his apprentice “flesh-caked ones,” and honestly, that’s a trade-off I’m willing to make.

In Englehart and Colan’s arcs, we get all of the above, plus the fear of introducing your lover to your family, (who all happen to be demons,) a battle against Eternity as they try to end the universe (existential dread, anyone?), and a meeting with every bitter, angry, nasty past version of yourself (who tell you over and over, that’s still who you are).

The high point of high ideas in this run isn’t something I want to necessarily spoil. But what if you knew your memories were false? In a very real way, they are. Memories are ephemeral, unseen, but real in their effects. And a false memory’s effects are just as real as any others. But then, what is real?

This particular crisis drags Strange and his lover/apprentice down to hell, where he fights a screeching Lucifer, at the same time battling his personal demons. And, of course, ultimately conquers both, giving the reader, not just an enjoyable story, but also a tidily wrapped moral with a bow on it.

Which is where the problem comes in.

As Englehart writes, he gives hints of things, existential ideas, one-liners that manage to be clever and wise. Consider:

“How is it that you would overcome me, when you cannot overcome yourself.”

“Without my mask, I’ll be just like everyone else.”

“What is memory anyway? Yesterday’s reality is no more tangible, then last night’s dream.”

All ideas and impressions full of thought and promise. Thought and promise that are never delivered on. Rather than fully explore any of these ideas hinted at, the stories simply conclude, expecting the reader to be content with a moral about not doubting yourself.

These sorts of empty promises come in perhaps their purest form early in the book, in the first arc’s conclusion. As Doctor Strange returns home, we zoom out to see, the cover of a comic, the Doctor Strange comic we were just reading, in fact. Closing narration tells us about the effects the story may have in the future, and the issue ends.

Now, I’m all for meta. Talk to me about stories, break the fourth wall, whether it’s Grant Morrison talking about viral ideas, or Garth Ennis torturing a character who’s technically not Superman.

But it has to belong in the story.

And these last two frames, they didn’t have to do with anything that had happened. There were no meta elements earlier, and the only talk about change happened one panel ago. It feels like the writer had two panels left over, and decided to hint at something kind of cool, with no lead up, and no payoff.

And to varying degrees, Englehart’s writing felt like that. As though there was always a piece missing from his epic ideas, whether it was the lead up or the payoff.

Art by P. Craig Russel is always a treat, and his Doctor Strange Annual (1977) is no different. Known for his work on Neil Gaiman’s Sandman, and a host of adaptations, ranging from Oscar Wilde’s Fairy Tales, to Richard Wagner’s operas, all the way to Lois Lowry’s The Giver.

Seeing his name in the table of contents, I was immediately excited, but it wasn’t till I’d finished reading that I found out this was one of his earliest published works. His third, if Wikipedia is to be believed. This added an extra element of pleasure, as his story is an opportunity to see him touch on themes and artistic motifs that he’s continued to play with since then. In this story, Russel takes Doctor Strange into Phaseworld, a new dimension with the opportunity to show the moody landscapes, skylines, and architecture that distinguish Russel’s art.

Portals figure strongly in the artwork, whether they take the form of doorways, or mystical tunnels, with much of the climax surrounding a magic mirror, and the conversation on either side. There are symmetries everywhere, circles and swoops, towers and mansions and temples, all beautiful, all capturing the eye. Russel takes time for vignettes too, spending panels to show details, letting the reader look around, and revel in the atmosphere he’s created.

The story itself is a tragedy, of love fought for, and the unattainable, almost cold, beauty of Phaseworld’s residents–a swan-winged man, and a duo of sorceresses–reflects this. There’s a subtlety, almost an eroticism throughout, as characters strive, fight for and against love, and by extension, fight for and against the world. It’s a story worth revisiting, page by page, just to savour the art. 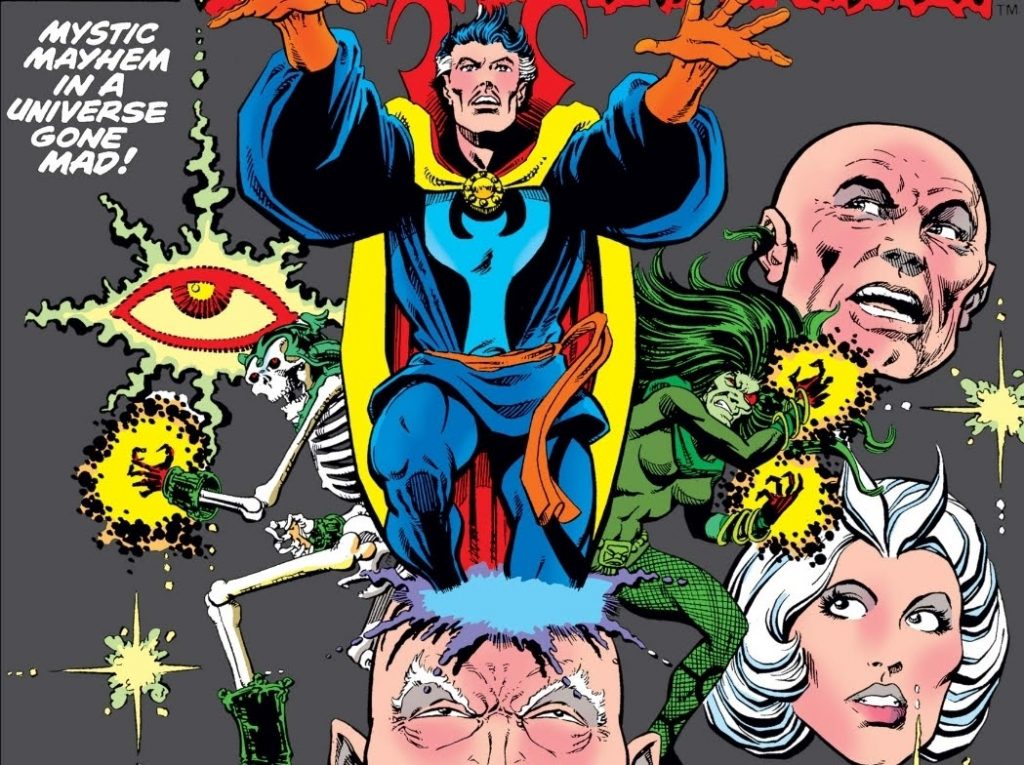 The final arc, with Doctor Strange #23 to #26 overseen by Jim Starlin, is perhaps the high point of the book. The tone is set early, as Doctor Strange enters a new dimension, one that, in his own words, “makes even Phaseworld seem normal.” Starlin’s art brings to life a series of non sequiturs, none of them belonging in a normal mind, but all finding their place in his artwork. Floating pyramids and eyes, a wide open mouth consisting only of teeth, hovering imps and creatures, all against a vast backdrop of stars and alien planets and floating chunks of debris.

Starlin’s writing is an extension of his art, a huge mixing pot of ideas. Travelling through character’s heads into their own dimension, only to find a faux medieval landscape, complete with black knight. The platonic manifestation of chaos and order. Oh, and I think I mentioned, the villains are literally trying to turn themselves into stars.

Like Englehart, Starlin plays with a toy box full of huge ideas, but Starlin delivers. Given the shortness of his arc as compared to the concepts he’s working with, he can’t fully explore everything. But he acknowledges the things he’s dealing with, and he doesn’t try and tidy up an ending just for the sake of wrapping up a story. He plays with ideas that might be too big to handle, but he doesn’t make the mistake of thinking the way to handle them is to change the story into a thin morality tale. He lets them stand on their own, as they are. Whatever they are.

Setting aside the landscape of big picture and epic ideas, it’s obvious Starlin’s having fun. Why else would he have a villain, modelled after Doctor Strange, look like a giant humanoid warthog? Or have Doctor Strange fight alongside a sun that happens to look like a woman? And the constant backdrops of the surreal and strange just scream that he’s enjoying himself, throwing everything he’s got at the page.

The fun that’s so clearly being had in this last arc, whether it’s shown in the appearance of a creature described as “the barrier between dichotomies,” or a warthog sorcerer supreme, make it my favorite in the book, a suitable place to end on.