You are here: Home / Featured / Brian K. Vaughn Takes Us to Space in Saga – Should We Follow?

At this point in his career, Brian K. Vaughn has a level of comic book credibility that is very hard to come by. 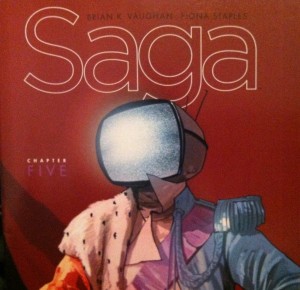 There will always be the Alan Moore and Stan Lee style legends, but in terms of modern 2012 relevance and consistency, you’ve got Grant Morrison, a drop down to a new tier, and Brian Michael Bendis and Brian K. Vaughn. This is oversimplifying for introduction’s sake, but the short data analysis here clearly indicates it pays to be named Brian and utilize your middle name.

Vaughn’s status is well-earned; Runaways, Y: the Last Man, Pride of Baghdad, and writing on LOST (don’t blame him for your problems here) make up the front-end of a stacked resume.

And yet, when the big new Brian K. Vaughn project was announced earlier this year from Image Comics, I was about as excited as the time I found a pecan underneath one of the cats on our couch. I’ll take it, but I really have a bad feeling here.

I think the ambivalent attitude had a lot to do with the name. Saga? Isn’t that just a little generic? Like the rapper P.O.R.N., isn’t a title like this search engine kryptonite?  And couldn’t a saga be about anything from an epic, romantic space odyssey (it is) to a boy wandering a desolate wasteland with naught but a bar of chocolate and his naivety (it isn’t, but don’t worry that trope is covered too).

The other, more sinister and subconscious problem I have with Saga as a title is that Saga was the name of my college cafeteria. Is this a completely irrational reason to judge the book? I’d argue no, and here’s why: my college cafeteria was the literal embodiment of mediocrity.

I imagine, ultimately, this is most college cafeterias, so I don’t feel particularly special in the matter. And I have to admit the chicken nuggets were borderline Top Chef. But there’s a reason that when my friend and I put together a Saga cafeteria cookbook we named it Polishing the Turd. From experience I associated the word Saga with 3 things: Turds, polishing, and that ratfink Richard Kelly (another time perhaps).

End of the day, Brian K. Vaughn or not, I couldn’t shake the feeling that Saga would always remain a polished turd, or even a Polish one, and I’m just not seeing the improvement there.

And then, of course, I read the first issue.

The first six issues of Saga represent a couple things:

2)      Another promising long run from one of the best story-tellers in the business, Brian K. Vaughn.

Honestly, if you’re familiar with any of Vaughn’s previous work, that’s about all you need to know to go ahead and buy the Saga trade paperback.

For the rest of the world… (yes, I’m operating under the presumption that my audience is not only existent but THE ENTIRE REST OF THE WORLD.)

What is Saga About?

In a galaxy at war, star-crossed lovers from opposing forces runaway with their newborn child to escape the cycle of violence. Sound familiar? It should. This is a romantic comedy for Star Wars fans, Romeo and Juliet traveling to Tatooine. Saga is the story of Marko and Alana, and their family that can’t exist in this galaxy.Throw in Bounty Hunters (called freelancers, and inviting a world of comic book meta-textuality), Robot Princes, and a planet called Sextillion (3 guesses, go ahead), and you have Saga in brief.

Like most great comics, though, the plot doesn’t really do the book justice. This is a laugh out loud funny comic, with elaborate characters and satirical creativity bursting off the page. Hard to reiterate enough that this is an elaborate, funny, family space opera with genuine characters. When you’re flirting this close with Star Wars, it’s pretty easy to drift into stock characters, and Vaughn has so far pretty deftly avoided that.

While many may reject labeling Saga as ‘satire’ (and to be fair, it is much more), there are strong moments where Brian K. Vaughn and artist Fiona Staples use their newly minted universe to reflect cultural and societal plagues we face right here on Earth.

The most obvious is freelancer The Will’s visit to Sextillion. Again, it doesn’t take a whole lot of effort to decipher where this might be going, but Vaughn uses the sex-obsessed whorehouse of a planet to mock not only our culture’s saturation, but to show just how thin and blurry the line between entertainment and human trafficking becomes. As an artist, Staples expertly blends the obscenity of the planet’s adult entertainment with a horrifying look at what happens to a man looking for the ripest of experiences.

Then, we have the Horrors of issue #3. These mutilated ghosts quickly become a lot more as we learn that Isabel and her ilk are casualties of a war that is not their own. Caught in the intergalactic crossfire, Isabel’s parents were ‘rebels’ according to Marko and ‘freedom fighters’ according to their own people on the planet. America and Iraq rarely gets summed up so effortlessly.

Where Do I Start With This Saga?

There’s actually a pretty nice opportunity to get caught up with Saga right now as the line took a break for the month of October. Image will be distributing issue #7 the second week of November, which means you have a couple options:

1)      Buy the Saga trade and enjoy all of the first six issues in succession. Then pick up issue #7 on November 14th and enjoy one of the surest bets among ongoing comics.

2)      Scour your local comic shops for the first six standalone issues. This is early enough in the line’s run that (with a little luck) you can have every issue in your hands in time for issue #7. I hopped on right around the time issue #6 was coming out and still haven’t found a copy of the first issue, but maybe you’ll have better luck.

Regardless of your approach, this is a great time to get up to speed with Saga and see what everybody’s raving about. There may not be much to the name, but Brian K. Vaughn, Fiona Staples, and Image Comics know how to make a great comic.