The Marvel Cinematic Universe has gone a long way to making a household name out of Black Widow a.k.a. Natasha Romanoff a.k.a Natalia Romanova a.k.a. Nancy Rushman a.k.a. Oktober (okay, maybe not all of these names are household just yet). Unlike associates of Iron Man, Captain America, and Thor, the characters in Nat’s orbit have yet to transcend in the way that Pepper Potts, Sharon Carter, Lady Sif, and even Happy Hogan have. That may change when Black Widow is finally released in theaters, hopefully sometime later this year. The delay of a major motion picture is hardly the most upsetting aspect of a global pandemic, but the removal of Black Widow from the release schedule at least gives intrepid readers the opportunity to better get to know the Marvel Comics characters that might soon make their big-screen debut. Read on to learn more about the people surrounding Natasha, and for a couple of suggestions for where to start your reading.

After undergoing some of the same Red Room training as Natasha Romanova, Yelena Belova became the second Russian spy to use the moniker “Black Widow.” Yelena and Natasha begrudgingly worked together a few times before Yelena gave up the spy life. As is often the case though, it wasn’t long before Yelena got mixed up with superheroics again, this time on the other side of the law, taking on the identity of the “Super-Adaptoid” after a confrontation with the Avengers left her scarred and furious. Yelena recently found her way back to the light, but just in time to once again find herself wrapped up in the drama of one Natasha Romanova. Yelena looks to be playing a major role in the upcoming film, played by Little Women’s Florence Pugh.

Suggested Reading: Marvel Knights Black Widow: The Complete Collection is a great place to start with Yelena. Collecting the first two Black Widow mini-series and Black Widow: Pale Little Spider, this collection gives you Yelena’s earliest stories, written by Devin Grayson and Greg Rucka, which present a young spy coming to terms with her place in the world and the fallout of her actions. To see Yelena facing off against the heroes she used to count among her friends, check out the second volume of Secret Avengers written by Nick Spencer, which installs Yelena as a higher-up on A.I.M. island. Aside from Pale Little Spider, all stories are also available on the Marvel Unlimited app. 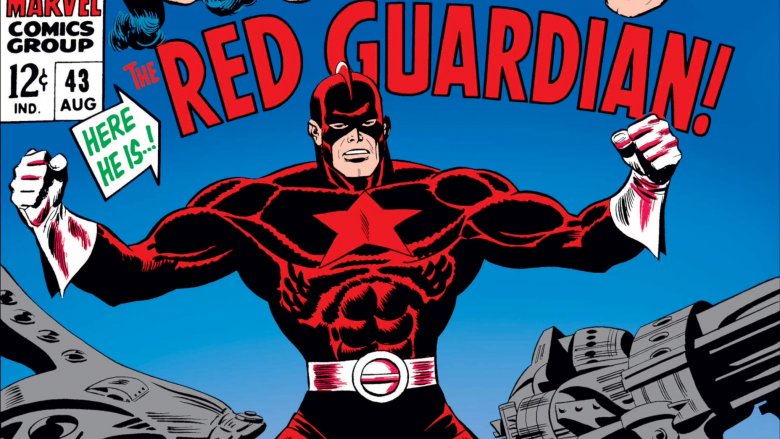 The mantle of “Red Guardian” has been passed around many a Russian Marvel Comics character, but none wore it more prominently than Alexi Shostakov. A test pilot married to the woman who would become Black Widow during the Soviet era, Alexi was separated from her at the behest of the government to become the second Red Guardian, the Soviet Union’s response to Captain America. Alexi lost his life in a confrontation with the Avengers, making a sacrifice that saved the lives of his foes, including his wife. Alexi has made appearances since, often through the use of LMD’s or supernatural means, and even recently took on the Ronin identity in yet another confrontation with his wife. David Harbour (Stranger Things) plays Alexi in the MCU’s Black Widow.

Suggested Reading: Alexi’s first appears in Avengers #43 and #44, written by Roy Thomas with art by John Buscema, issues that are easiest to find on Marvel Unlimited. His past life with Natasha was fleshed out in Black Widow: Deadly Origins by Paul Cornell, and his return as Ronin can be found in Black Widow: Widowmaker, both of which are available on Marvel Unlimited. 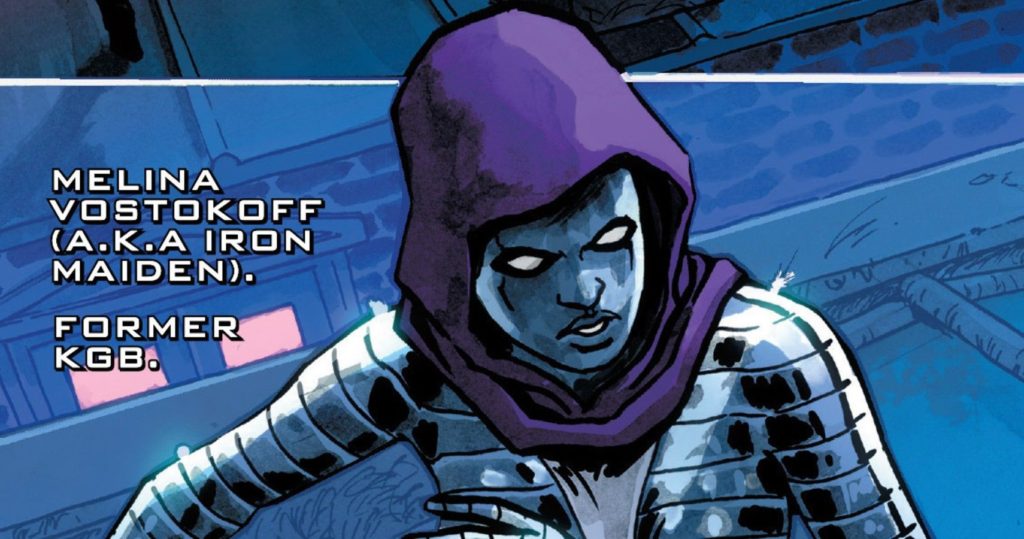 Another product of Russia’s Black Widow Ops Program, Melina Vostokoff quickly came to resent Natasha for her great skill and renown. Eventually Melina left Russia’s service in favor of the mercenary life as Iron Maiden. After accepting a contract on the Black Widow, Iron Maiden came very close to accomplishing her goal, but was thwarted at the last minute. She went on to join a legion of female super-villains known as the “Femizons,” under the command of Superia, and has bounced around a few titles in the time since, awaiting the opportunity to go after the Black Widow once again. Melina will appear in Black Widow, portrayed by Rachel Weisz (The Mummy, The Favourite). But will she be friend or foe?

Suggested Reading: As with Red Guardian, it’s easiest to find Iron Maiden’s debut on the Marvel Unlimited app. Issues #10 through #13 of Marvel Fanfare from creators Ralph Macchio and George Pérez. Iron Maiden’s time as a member of the Femizons can be found in the back half of Captain America Epic Collection: The Superia Stratagem. Look for Captain America #389-392 for that story. 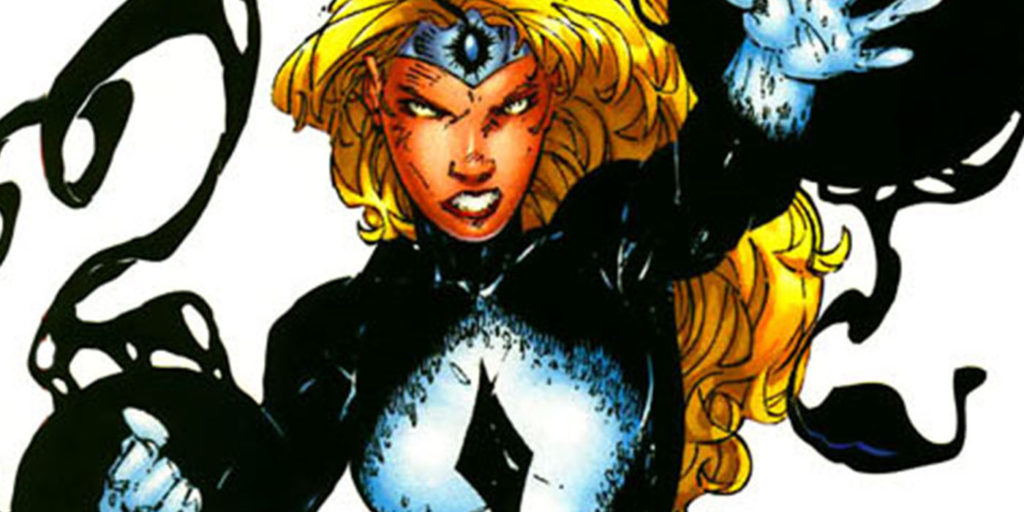 Unlike the others on this list, Laynia Petrovna was born a mutant. Her birthright is the ability to access and use a dark form of extra-dimensional energy known as the Darkforce. In her capacity as a mutant, she was recruited to be part of a Russian super team tasked with returning Black Widow to the USSR. She chose instead to stay in the United States and join the Champions, fighting alongside Natasha, rather than against her. Darkstar bounced from team to team, including the Winter Guard (more on them later), but met her end as a casualty of Grant Morrison’s run on New X-Men. The Darkstar name and abilities became a mantle passed down to other heroes, before Laynia was ultimately resurrected.

Suggested Reading: Laynia’s debut and brief stint as a member of the Champions (issues #7-17), written by Tony Isabella and Bill Mantlo respectively, are collected with the team’s first volume in Champions Classic: The Complete Collection. Laynia returns to the USSR in Iron Man #109-112, collected in Invincible Iron Man Masterworks Vol. 12 by Bill Mantlo. Finally, she plays a small-but-tragic role in Grant Morrison’s New X-Men (specifically #128-130). 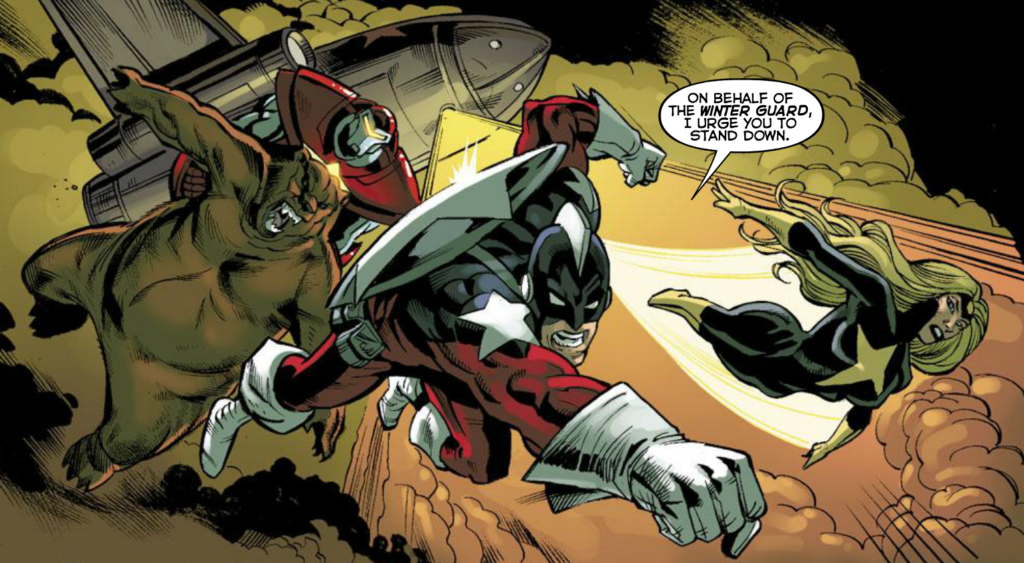 After the fall of the USSR, the Winter Guard was formed as the new super-team for a new Russian Federation. Once described by She-Hulk as “Russia’s answer for the Avengers,” the team’s initial roster included Darkstar (Laynia Petrovna), Steel Guardian (a former Red Guardian who replaced Alexi), Vanguard, Sibercat, Vostok, Fantasia, and Powersurge. The team often serves as a foil for American super-teams in times of crisis, be it the Secret Invasion or the emergence of a Red Hulk, but from time to time they get their own adventures. It was on one such as this, in battle with Fantasma and the demonic alien Dire Wraiths, that Laynia’s indomitable spirit returned to the land of the living and rejoined her team. The Winter Guard persists up to today, replacing those killed in action with new members in the same identity. While their methods may contrast with those of more familiar teams like the Avengers, there’s no doubting they are heroes.

Suggested Reading: The Winter Guard debuted in 1998’s Iron Man #9 to aid Tony Stark in a fight against the Mandarin in a story collected in Iron Man by Kurt Busiek & Sean Chen Omnibus. In the last decade, the Winter Guard got their own mini-series – Darkstar and the Winter Guard – which also saw the return of original Darkstar Laynia Petrovna.

As Marvel Comics revs the Black Widow machine in anticipation for the film, you’ll surely be seeing more of these characters. Yelena Belova and Alexi Shostakov are due to co-star in a one-shot coming in April, and the Winter Guard is never gone for long. Keep your eyes peeled for these Russian wonders on print and the silver screen.