You are here: Home / Featured / Batman: The Court of Owls – The Dark Heart of Gotham

Since coming to life in the pages of Batman, a question has hung in the air over the dark knight’s home: What is Gotham City? For some, like Bruce Wayne, Gotham is a city of light; one that tests its people and shapes them into something just and enduring. But there is also a darkness living in the city’s streets and skyscrapers; a malignant, hungry presence that defines Gotham as much as the dark knight himself.

, sending Bruce Wayne on a chilling journey into the blackened heart of Gotham City. Built on a masterful plot, breathtaking gothic visuals, and a terrifying new villain, Court of Owls is a story that cemented an entirely new era for the dark knight, as his mission to save his city gives way to a reality darker and more mysterious than he could ever imagine.

The rebooting and relaunching of characters and continuity is a tradition as old as the medium of comics, but even still, Snyder’s journey to Batman was an interesting one. Having written Gates of Gotham and The Black Mirror for Detective Comics in 2011, the up-and-coming writer suddenly found himself on the main Batman title through DC’s New 52 relaunch, picking up in the wake of Grant Morrison’s spectacular seven-year run.

“Everything was a lot of pressure just because I was still so green,” recounts Snyder.
“I thought it would take me years to both earn a chance to be able to write in the Bat world at all. And Batman being my favorite character, I was…convinced that I was nowhere near ready to take anything like a full feature.
The point is, I was really scared when I came over to Batman then found out it was Batman #1.”

The transition was complicated even further through Morrison’s continued involvement through Batman Incorporated, a series that continued their previous story and ultimately made it impossible to reboot continuity. However, instead of an obstacle, Snyder saw an opportunity to enhance his take on Batman, tearing down the godlike figure of Morrison’s time to reveal the more conflicted, human hero underneath.

“Bruce is a character…constantly at war with his own immortality. To me, that’s deeply interesting,” muses the writer.
“He’s this character that makes himself(…)into this legend(…)something that extends beyond(…)his own limitations. At the end of the day, what makes him human is what makes him relatable. I like showing how wrong he can be, and how weak he can be.”

Picking up directly where Morrison’s run leaves off, Court of Owls begins with a Batman who seems practically omnipotent in Gotham, bolstered by a range of fantastic gadgets and fully committed to elevating his city both in and out of costume. While DC’s other heroes exited The New 52 starting from scratch, Snyder makes full use of the dark knight’s lengthy history in Court of Owls, building a Batman more experienced and confident in his mission than ever before. These comprehensive versions of the hero and his city are heightened even further through the art of Greg Capullo, who evokes the classic style of Batman: The Animated Series but with a sharper angular look that erupts in violent colors and shadowy inks courtesy of FCO Plascencia and Jonathan Glapion. These images might seem classic, even familiar, but Snyder quickly makes it clear that this new normal isn’t what it seems, chipping away at Batman’s illusion of control as an ancient evil re-emerges in Gotham. 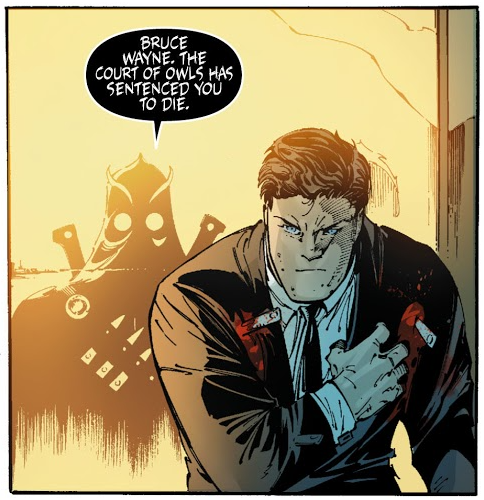 When shaping his story, Snyder knew he wanted to present Batman with more than a thrilling mystery: he wanted to deliver a new villain to challenge every part of the dark knight and his world, taking the familiar in Batman and making it alien and unknowable. For Snyder and his new collaborator Capullo, this inspiration would come through a visit to Snyder’s home of New York City.

“Going back to my old neighborhood, I remember(…)it having changed so much and…It was very scary all of a sudden. I realized that the way to hurt Batman, to really get at him and tell a powerful story was through a dramatic and extreme version of what I was feeling. Where he might be so confident about the city right now, but if the city could show him, ‘you won’t know me in five years and you didn’t know me five years ago. And if I could weaponize that and make a villain out of it, it would be(…)really unsettling to him.”

Pulling from a deep love for the history of Gotham and his own roots as a horror writer, Snyder gave form to these fears through the Court of Owls, a mysterious cabal of the city’s richest and most powerful families. While the larger lore of Gotham has always been a mainstay in Snyder’s work, the writer uses it to an even greater effect in Court, elevating the new villains into mythic figures and turning Batman’s own powers of fear against him. Beginning the story through a street-level crime, Snyder begins seeding the Court’s myth in each issue, tying their legend to Bruce’s childhood and even older generations of the Wayne Family. This terrifying legend is given even more power through the enigmatic Talon, an unstoppable servant of the Court who hunts both Bruce Wayne and Batman relentlessly. More than just a physical threat, Snyder frames The Court and the Talon as manifestations of Bruce’s deepest fears: a deep, unknowable darkness at the heart of Gotham City.

Pursued by the Talon and driven away from his friends and family, Bruce is sent on a terrifying journey that slowly breaks him physically and mentally, brought forth through Capullo’s haunting artwork. The bright white of the comic’s gutters give way to an inky black, Batman’s appearance grows gaunt and ragged, and the book’s visuals warp and twist as the dark knight slowly descends into madness. This builds into a frightening crescendo in issue #5, as the writer delivers a full subversion of Batman’s history, heightened by nightmarish visuals from Capullo, Plascencia and Glapion that literally flip the book’s layout on its head. But even after, Snyder continues to weave the legend of The Court into the fabric of Batman’s world; each reveal elevating their mythic power until it fully eclipses the dark knight’s.

“In doing that it shows him his own mortality and how small he is…,” muses the writer.
“They’ve influenced the shape of Gotham, politically, architecturally, socially — all of these kinds of things, and what is he? Whether he’s been around five years or 70 years, it doesn’t matter, because it’s a speck in the timeframe of a 400-year old city. It’s belonged to them…and it always will.”

Through this monolithic new villain, Snyder and Capullo completely upend the dark knight’s mythos, tearing down the certainty of what came before and delivering a powerful question to the hero and readers: how does one man save a city practically built on evil?

By its third act Snyder and Capullo’s story sees Bruce’s vision of Gotham annihilated, as the realities of his mission, his family, and even his own history crumble under the weight of a dark and terrible truth.Yet, in spite of its genre-savvy, almost meta nature, Court of Owls isn’t a deconstruction of Batman at all: it’s a challenge for the hero to confront an evil he might never fully defeat, and endure in spite of that. Bruce’s overconfidence in his alter-ego ends up trapping him in a labyrinth, both spiritual and literal, as The Court continues to peel back the layers of his alter ego. But while this loss of certainty is used to dismantle Batman as an individual, nearly tearing down his vision for Gotham, it’s his reliance on his growing family that allows him to persevere, allowing Batman to rise again stronger than ever, as The Court crumbles from within. 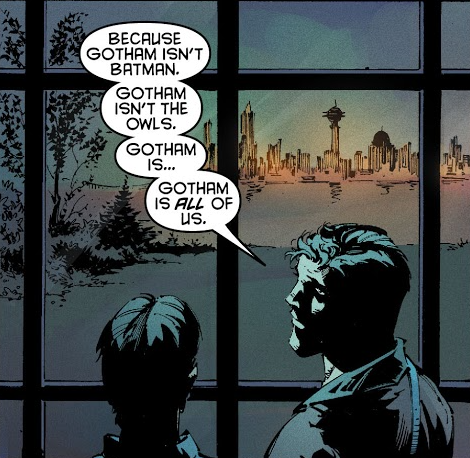 Coming at the forefront of a new era for DC Comics, Court of Owls marked a definitive new chapter for Batman, and the numerous creators who would continue to bring his stories to life. Snyder, Capullo, Plascencia and Glapion, all relative newcomers to the title and first-time collaborators, quickly left their own mark on the character: the idea that, instead of one man, Batman is a community; a growing army of citizens fighting to make Gotham a better place. Snyder and Capullo began Batman as relative strangers, but Court of Owls quickly forged them into the definitive modern Batman team; a community of their own.

“I think we clashed at first because I…wanted more room than was helpful for the book,” recounts the writer.
“But then as we became friends, we developed a sense of trust between us. We wound up realizing that we had the exact same priorities for the book, which is that as long as the ideas and storytelling were as good as they could be, it didn’t matter if it came from him or it came from me. It became the best collaboration I’ve ever had.”

In an era defined by the reboots and relaunches of beloved characters, Snyder, Capullo, Plascencia and Glapion deliver a story that dives deep into the philosophy of Batman, having the character endure the horrors of the past to strengthen his hope for the future. Court of Owls introduces countless new elements into the character’s mythos, but instead of transforming it, the story acts as a pure distillation of the dark knight’s mission and message. The Court and the darkness they bring will always be a part of Gotham’s history. But as long as its people continue to look to the future, and fight for a brighter tomorrow…Gotham will always have a Batman, too.