Nick Spencer strolls into Ant-Man #1 with impressive confidence. With a glance of his past year, it can easily be seen why. Spencer recently ended his seminal series Superior Foes of Spider-Man, a heavily lauded story with art by Steve Lieber. In Ant-Man, Spencer gets right back into telling stories about people as failures.

This may seem like a confusing direction to take the hero. On one hand you have a character with a negative appeal amongst even his superhero peers. On the other, you have a character who is a founding Avenger (Hank Pym) as well as the titular character of Marvel Studio’s next big film (the trailer for which just premiered the day before this issue was released).

In this story, Spencer has Ant-Man successfully ruining his good fortune, just as he did with Superior Foes cast. This works and connects with Ant-Man enthusiasts. Scott Lang is hardly a fantastic human being and though he’s not Eric O’Grady, the Irredeemable Ant-Man (as penned by Robert Kirkman), he is still a criminal and a screw-up. But after dying and returning to life, he has been given a second opportunity to rebuild his life as a father and a hero. In baby steps, throughout the first issue, he squanders both.

This is the stigma that comes with being Ant-Man. The character can never catch a break, he always does something wrong and/or ends up dead. It seems, as storyteller, Spencer has set a goal to accept that, doing so by showing that Scott Lang too accepts this. Hopefully from coming to terms with the unhealthy reality that comes with being Ant-Man, Lang can learn how to be a better hero and turn the name into one that is praised and recognized, just like Iron Man. 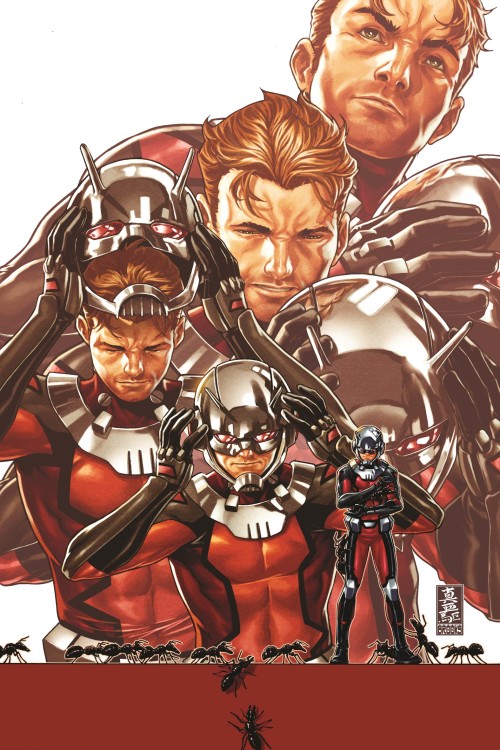 What makes #1 so great is the quirky method of storytelling. It’s rich with character and the art is a blissfully perfect accompaniment in terms of tone. While Squirrel Girl #1 also started this month, the story is as ridiculous as the method of storytelling, so it was logical to give a bombastic, cartoonish style to the art. In Ant-Man, Rosanas and Boyd keep the images detailed and realistic. Lang’s shrinking effect from the Pym Particles, the grossly detailed ant friends, even shrinking down into the toothpaste tube to brush his teeth (because he’s so pathetic he can’t afford a new tube). It’s comical, it’s realistic, it’s relatable, and best of all — it’s small.

All of his problems are big, but only when they are swarmed together. Separately, like ants, they are so small they would never be visible on his surface. You would never know Ant-Man, strolling around New York City in that costume, had the day-to-day problems he has. But his issues heap together and build into a pile until something breaks. Lang is not stupid, not by any means. But his lack of great responsibility (to accompany his great power) is monumental. Watching characters, especially villains, attempt to win and constantly fail can be fun. Spencer has proven this.

It may be a different story altogether with Ant-Man. With a 2015 film approaching and new readers eager to find out more about this character, maybe this time around Spencer’s characters should win some more than lose some.